Don Wert
Don played third base for the Detroit Tigers in the 1960s and was selected to the 1968 AL All Star Team.

Carlos 'Corky" Evans
Corky Evans never played in the major leagues but was a catcher in the Baltimore Orioles , Seattle Pilots and San Francisco Giants minor league organizations. He was also mentioned in Jim Bouton's book "Ball Four". I got these cards signed through former Seattle Pilots and Brewers pitcher Ray Peters, Thanks, Ray 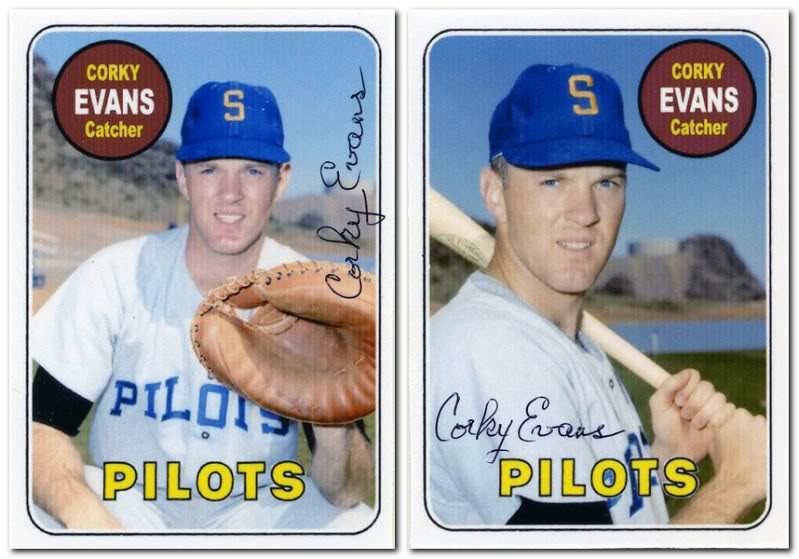 Ed Charles
Ed Charles played for the Kansas City Athletics from 1962 to 1967 but I remember him watching him with the 1969 Mets. I can remember seeing him hit a home run against the Cardinals in 1969 to clinch the National League East and seeing him run around the bases. He retired after the Mets won the World Series.

Bill Fischer
Bill came up with the Chicago White Sox in 1956 and pitched in three games. He also pitched for the Detroit Tigers, Washington Senators, KC athletics and the Minnesota Twins before retiring in 1964. He later became a pitching coach for many teams and organizations like the Reds from 1979-1983, the Red Sox from 1985-1991 and the Devil Rays from 2000-2001.

Herb Washington
Herb was the "Designated Runner" for the mid 1970s Oakland A's World Championship teams. I sent him three customs but he sent back a 1975 Topps. I really wanted to get the 1975 World Series card back so I could send it to Darold Knowles. Oh well........ I'll probably send them again with some extras for Herb

Dennis Musgraves
Dennis pitched in five games for the 1965 NY Mets and started one game. All photos were originally black and white they I colorized.

Gene Hiser
Mr Hiser was an outfielder for the Chicago Cubs from 1971-1975. He was originally a first round draft pick in 1970 by the Cubs.

It's always nice to get back a return you thought you would never see again. Mailed this one out back on April 26 of this year. Looking at his return rate on SCN, I knew it would take some time to get it back.

Wayne Comer
Wayne was originally signed by the Washington Senators in 1962. He was traded in 1963 to the Detroit Tigers and played with them in 1967 and 1968. He was drafted by the Seattle Pilots in the 1968 Expansion Draft and was their regular outfielder in 1969. He later played for the Senators and finished his career back with the Tigers in 1972.