Ray Peters and Frank Kimball
Today's return is special  because of two old teammates reuniting. I have known Mr Peters for many years after sending a TTM request to him. He loves everything Seattle Pilots, having been in the organization as a pitcher.

Ray Peters and Frank Kimball were teammates in the Seattle Pilots organization with the Class A 1969 Clinton Pilots in the Midwest League. In 1970 Mr Peters made the major leagues with the Milwaukee Brewers, pitching in 2 games. Mr Kimball left baseball after the 1970 season , making it to Double A.
Mr Peters, who lives in Texas, has been contacting former teammates and opponents from his playing days and he found out his old catcher, Mr Kimball, also lives in Texas. He got in touch with him and met him for lunch and snapped this picture of them together. 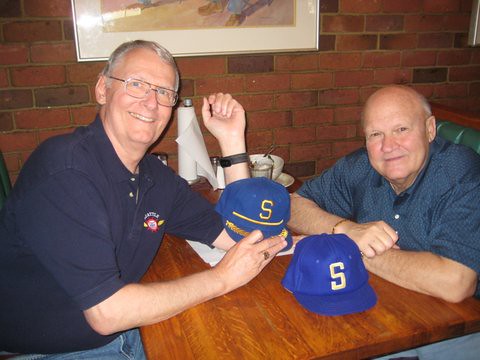 Ray sent me a copy of the picture and when I saw it, it screamed for a  "Then and Now" card. Mr Peters told me Mr Kimball would be coming by for lunch last week, so I gathered all my Peters and Kimball images and added more from Keith from NYC and made up some custom cards for the occasion. I printed up extras for Mr Peters and Mr Kimball and 1 each for Keith and I.

For any TTM autographers, you will not find a more nicer guy than Ray Peters